Project Scope and Start of Development

Hello again! I can't express how honored I am to know that you're reading this devlog. I hope it can be as fun for you to read as it is for me to be developing this game. Today I want to talk a little about the scope of the project (the main goal I want to achieve with it right now) and the beginning of development.

My main concern when I started developing this game was to be able to give personality  to each character. I wanted not only to give them different arts for their game elements but also to make their gameplay feel kinda of unique. For that to happen I knew I had to plan the system in a way that would allow me to tweak not only the parameters but also change some mechanics. The system needed to be dynamic enough to bear some weird gameplay changes and most of the stuff I did this week was to apply this dynamism.
What I mean for dynamism is stuff like: I don't want to just be able to tweak the speed that the controller moves around the grid, but also HOW the controller can move (I'll show a few examples later on this devlog).
I also wanted to limit myself a little, so I wouldn't be adding stuff forever on the game. For that I wrote down the features that I thought was crucial and made the Build Planning based on that.
The current scope of the game is:
- Core Mechanics of a Match-3 game familiar to Tetris Attack, but dynamic enough to add different playstyles;
- Singleplayer Arcade Mode where the game uses it's core mechanics to make a singleplayer "infinite" experience where the player earn points and sets its highscores;
- Local Versus Mode, where the game uses it's core mechanics to put one player against another in a battle. It's a more action paced mode than the arcade, as the players needs to attack others and make some strategies depending on their witches playstyle and abilities;
- 4 Basic Characters;

I think that with all that I can show the complete experience I want to give with this game, which makes me able gather some people to play and validate the idea. After validating, I can have some crucial feedback to know how to proceed with the game. Probably the next steps are gonna be:
- Online Multiplayer;
- Artificial Intelligence that can play against the player (or against each other? lol);
- Story Mode;
- More Characters;

I'm planning myself to have a first playable version, the one with the crucial features, by July 15.

The first devlog I made was kinda of too raw.  I had some ideas on how I wanted the visual identity of the game to be, but I hadn't got the time to actually test it by then. I was a little afraid that the next devlogs could get too boring to read, so I decided to start thinking on the visuals of the game so maybe I could have something more visual to show instead of only text and ideas.
I wanted to make a game about witches so I started researching a little of Wicca aesthetics and Pop Culture Witches. It brought me some really fresh ideas but the tone of it was kinda too dark or too "silly". I didn't really want my game to feel too dark, as it's an action puzzle game, and I also didn't want it to look too childish. I had to find something in between.
After a few scracthes on my notebook I had something like that for the characters: 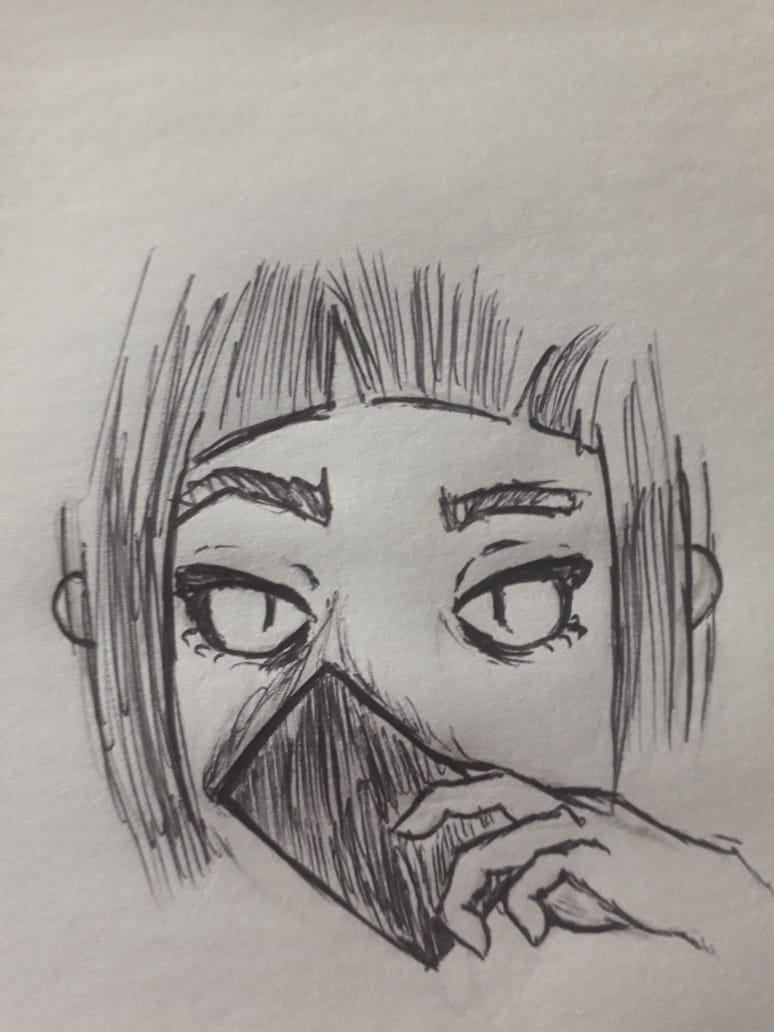 Something that looks a little like Soul Eater, that has really strong cartoonish traits for the characters. I still have a lot to think about the characters, but this is probably gonna be the road I'll take with their style.

I also needed to think about the visual identity of the game itself. I wanted to make something more neon or glitchy (so I could use a lot of blue, purple and pink), so I'm currently experimenting with those ideas. To fit this glitchy/neon visuals I'll try to make the witches more modern. Like, witches that live on our current time.
There's the pentagram I made for the last devlog as a concept test, now I'm trying to go for a more neon style. I come up with this concept art:

I'll probably make some more adjustments on it later (because it's gonna be my banner for a while), but I really like the way it looks. I feel like I missed some blues in there, but it could lead to a really cool visual identity for the game.

I started this week creating the project from scratch, and the first thing I needed to make sure was that the game could load a character. This would dictate a lot on how the core mechanics would load and how the grid would be made.
After that I made all the base objects the game would need (blocks, controllers, grid, etc...) without really implementing them.
Once I made all of the needed objects and their needed loading flow, I started to make something I call "Grid Controller". The grid controller is what moves the blocks around the grid, and it is what the player controls. I made the grid able to create blocks and made the blocks able to move/fall to test the grid controller properly:

I wanted to make sure I could create it as customizable as possible, so I could create a controller that have those 2 areas as the above, or maybe some different ones that have 3, 1 or N areas that could select and interact with the grid in different ways, like the following where you don't actually swap blocks, but pick one up and move it around the grid:

This will alllow me to tweak not only the parameters but also the way each character plays the game.

If there's one lesson to be taken from making the system that way is: It takes a lot more time to develop. I wanted to have the blocks matching already, but as each characters might have different matching logics that trigger different effects I really have to be careful when implementing it. It's probably gonna be on the next devlog as I'm diving into it right now!

I really can't express myself enough on how good it is that you're reading this devlog. I'm really excited to finish the next week so I can have something for you to test with me! The system is progressing in a good pace, I think, and I've learned a lot already making this.
If you're interesting on more technical stuff about how is the programming or art is being made, or just want to say something about the project, feel free to use the comments below!
I'm also working on a video devlog as my new camera just arrived. I'll link it on the next devlog, if the video's up by then!

Once Upon a Witch

Any updates on this? I love the art!